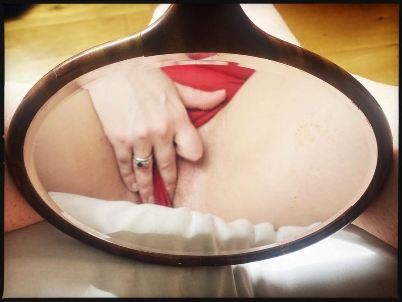 I love this prompt. Those spinning wheel are just so much fun and some of the combinations that people ended up with were really tough but the resting images were amazing. Feel free to go back and spin the wheel again if you want more challenges and it will definitely be a prompt we revisit again in the future at some point.

Molly’s Top 5 Pics of the Week

The spin of the wheel gave Modesty Mirrors and Doorway as her two prompts. The resulting image is just brilliant. The mirror/reflection gives the image multiple layers of interest, their is Modesty and what is in the room with her, then there is the frame of the door and then another one created by the mirror which actually holds another reflection of Modesty in the edge. It is just such a dynamic image with so much going on in it, at the centre of which is Modesty’s beautiful self.

Livvy’s two prompts where mirror and underwear. I love that it is the frame of the mirror that is actually in focus which means her reflection is slightly soft within the image but actually helps to give us the feeling of being the voyeur. Also that splash of red of her knickers and the way her fingers are pulling them aside is just so damn sexy and remind me of what it feels like to have someone slide their fingers into your underwear

LSB’s two prompt where chairs and shadows and I really am not sure I need to write anything here about why I picked this image because it totally speaks for phenomenal self.

Rosie’s prompts where Doorways and Natural Light and I absolutely love what she created with those ideas. This is an image that makes me wonder. Is she leaving the room or going to the room, is she leading the way or reaching out to someone. Everything feels slightly out of reach in this image and that gives it an air of mystery that I love

So Missy’s two prompts where Outdoors and Sex Toys and because she is brave and amazing she decided not to take the easy option of photographing a sex toy in the wild but instead went that one step further and included herself in the image. The rest is this utterly fabulous foxy find but you should also read the words because it getting this shot didn’t go exactly as planned.